FulguroPop – Hi Daniel, let’s start with the new Marvel Legends. They benefit from the Photo Real technology. How do you adapt this tech to comic book characters, since they’re not really supposed to look real ?

Daniel Yun – Hi. Our partners at Disney and Marvel, they send us assets for the characters, for this Jeff Goldblum character for example. Dwight and ehe design team work continuously hard on that technology to make it the best it can be.

And when you work on a pure comic book character, say Wolverine, what kind of asset, of reference, do you use for Photo Real technology since it’s not a real person.

First, we work with our partners to kinda figure a look they think is the most appropriate for Wolverine. That would be what the fans really want. Then we apply that technology to make it as awesome as possible.

Speaking of the choice of characters and you partnership with Disney, are you already working on the new characters Disney just acquired through the recent Fox deal.

I don’t wanna spoil anything, but that could be an option. I hear rumors about them, but I can’t confirm anything. That’d be awesome to have something like that. What do you think ?

I’d love to have them.

A new version of the Fantastic Four, that’d be cool. Perhaps a new movie version in the MCU ?

That’d be awesome. Ryan [Tin, whom we interviewed last year, Ed.] revealed the new Marvel Legends for them, did you see them ?

Yes I did. The new Thing looks awesome and is definitely a must buy for me. What about you ? Which Fox/Marvel character would you like to see in the future ?

I’d love to personally see the X-Men from the new Dawn of X comic series. If you’re read House of X and Power X series, they’re amazing. That series by Jonathan Hickman has been revolutionizing what X-Men are today. Personally, I love that series right now. We haven’t done anything on that book… I personally love X- 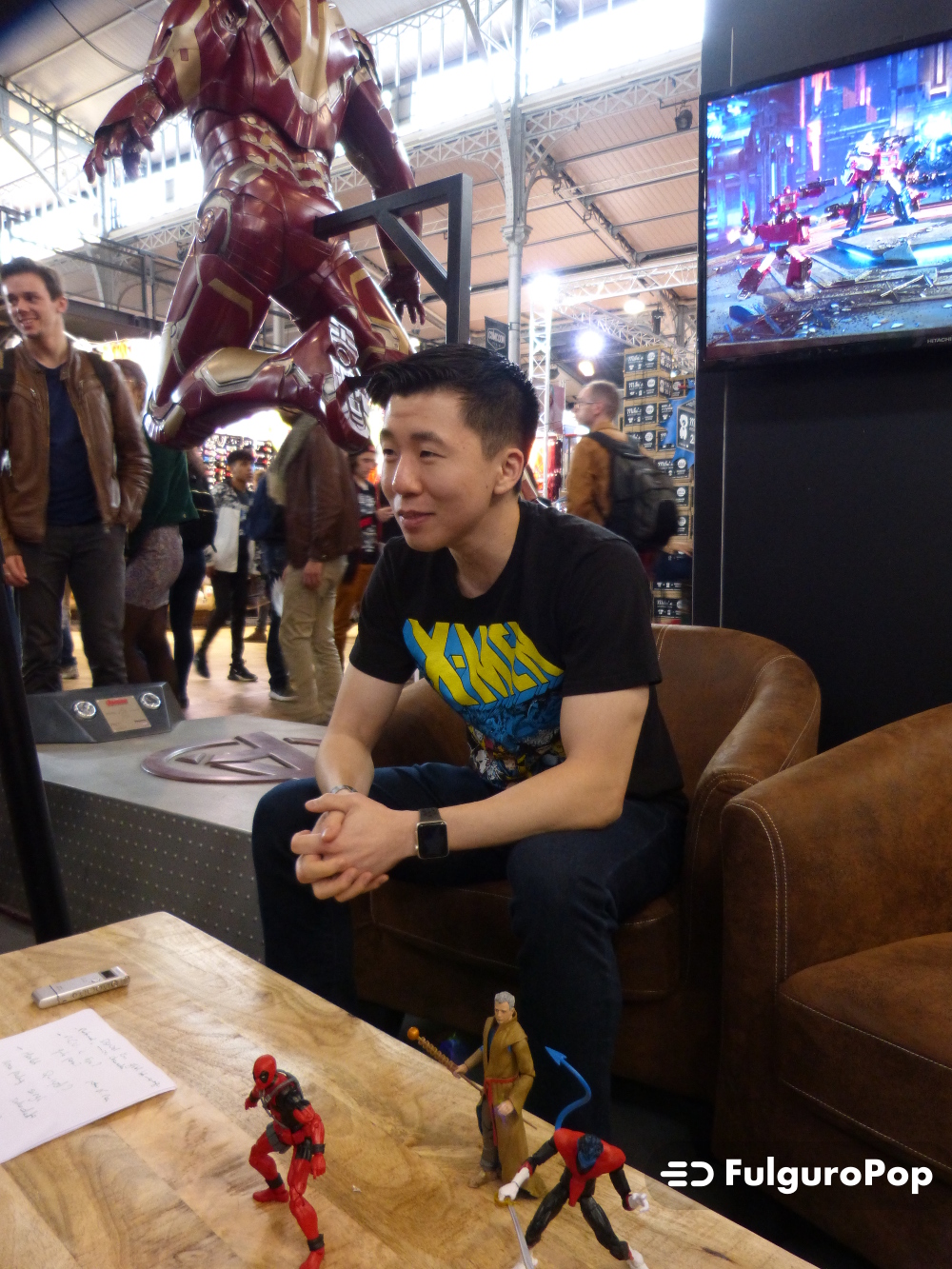 Men. So anything X-Men related I get very excited about it.

Hasbro has a crowdfunding platform, Haslab. It worked for Star Wars and Transformers, but not so much for Sesame Street, would the Marvel Legends line be an opportunity for Haslab ? Maybe making a vehicle for the line…

Do you have something in mind ? What do you think ?

Maybe a Quinjet, any vehicle bigger than a bike.

The purpose of me coming here is to really listen to the fans. Because we really take a lot of input from the fans, about what they want. And Haslab is something Marvel hasn’t done, you’re right. It’s something that potentially could be happening and we love to hear the ideas from fans to see what they’d like to see. It’s something we’ve been thinking about real hard but if it’s something we do we want it to be right and perfect.

If you do, make sure that you offer it outside the US.

We understand that Marvel Legends fans are not just in the US. We have a big community here in Europe and that’s why we’re here. If we ever do a Haslab, we’ll make sure we hear from you guys as well.

Thank you. The Star Wars brand is getting a new line of 8-inch figures called Hyperreal with an endoskeleton.

It’s a great figure. I didn’t buy it.

Maybe the technology is available. We haven’t expanded to much from the 6 inch scale because like you said even though you like it you didn’t buy it. In the end we are a business, we need to make sure that we produce things that people will also buy. Star Wars is doing great right now with Hyperreal and for them I think it’s working great. I can’t really confirm or deny we’re gonna do something like that for Marvel Legends. We’ll see, whatever the fans want. Hopefully at conventions like Comic Con Paris, I’ll meet more fans and hear what they are interested in.

At the moment, you only have one scale for Marvel. You cancelled the 4-inch one years ago.

It didn’t have as much appeal as we thought but I personally loved them. But yeah, we’re always thinking of new ways to evolve and innovate because our fans are not stagnant.

Speaking of what fans want, do you think you could do a Fans Choice ?

Yes. We did a fan vote in 2016 for Marvel Legends. The winner was Songbird. We always wanna do more things like that. We want to make sure everybody is heard, you know, not just the US. We’re very much thinking about doing something similar to another fan vote but we just want to make sure we have the right characters and the right platforms, to make sure that it is compelling for everybody.

Your premium roleplay accessories are amazing ?

Which one do you prefer.

The Punisher War Machine is an interesting one. You chose something different from your previous releases. It’s not from the MCU obviously. And it’s not just a repaint of you Iron Man helmet. The mechanism is different too.

We’re just lucky because Marvel has so many more obscure characters and it’s really a decision process that we go through with our partners again at Marvel and at Disney to make sure that we make something that is compelling for everyone. We did hear from different fans that it was a character that was interesting and so we saw that and we just took a risk. We think that that Punisher logo is just very appealing to everybody. If you put a War Machine and a Punisher logo, it’s like perfect.

But you could have just produced a War Machine helmet. 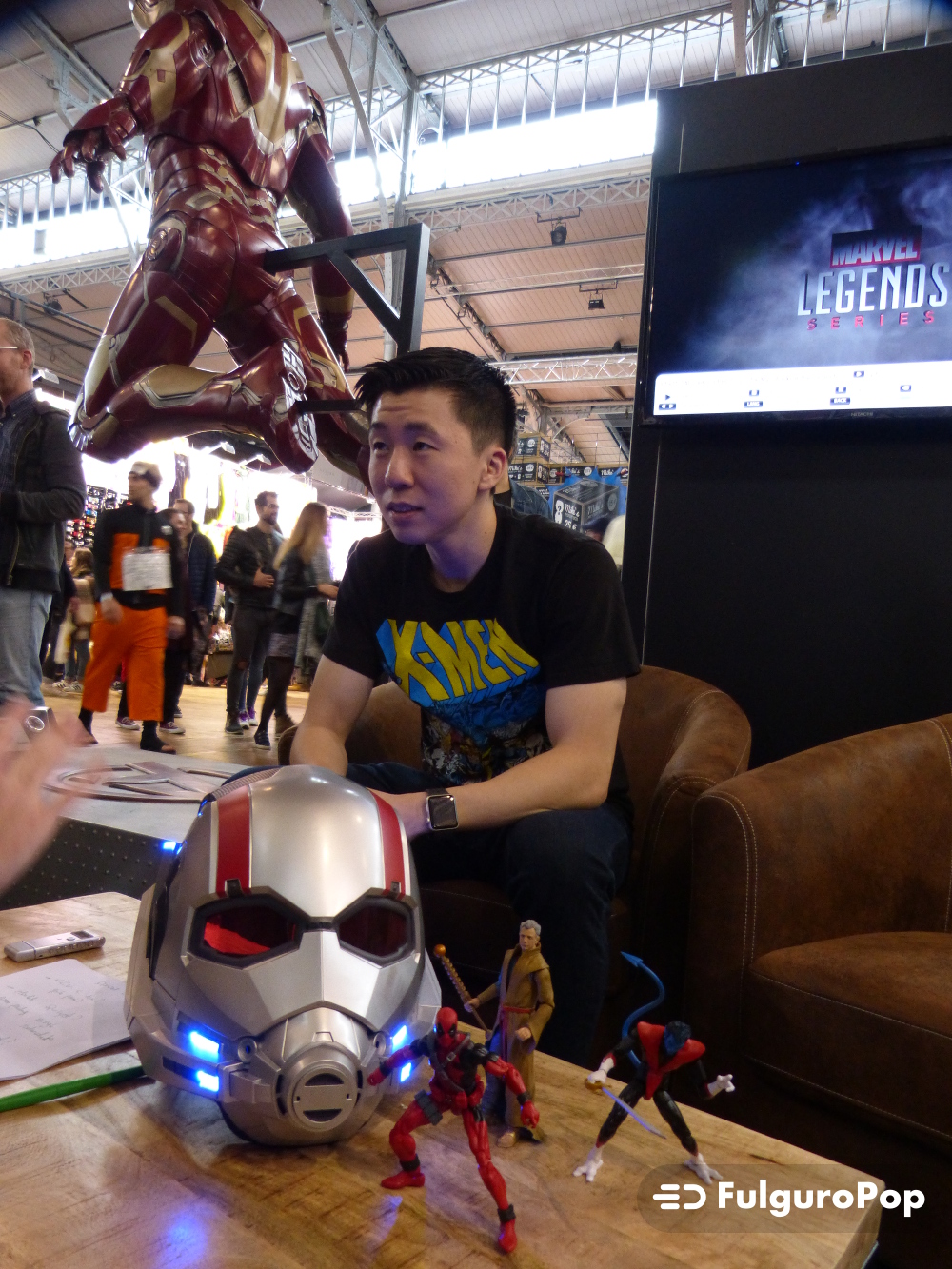 Kerbans – And the figure too.

Blaster –  for a long time, your Iron Man figures suffered from the red being a bit off, looking slightly pink or with a marble effect. It was quite not as appealing as the other armored characters like War Machine.

Blaster – It’s way better than before. The red is candy red. Just like the 80th Anniversary classic Iron Man, it’s impressive what you did there.

For Premium roleplay, what would you guys want to see next ? You guys mentioned more obscure characters…

It does not have to be a helmet, we made a gauntlet…

Blaster – Wolverine claws. There might be a safety issue.

It might be a little dangerous, yes. If it’s too premium

Blaster – not counting the Punisher helmet, all your accessories are from the movies.

Yes but we are definitely exploring new things and if the fans really want something that is non-MCU, more comic book related… Again a lot of us like me, Ryan, Tony, Dwight and all our engineers we are big comic book fans too. So we know all the characters and… We’ll see.

In Europe we’ve seen a new line of Marvel Legends re-releasing older figures on single card, without the BAF part and at a much cheaper price. How do you choose the characters for this specific line.

That line is for retailers that normally don’t sell Marvel Legends.

Yes. Usually those figures would only be for stores that don’t sell the regular BAF figures. When it comes to character selection it’s always collaborative process with our partners and our Marvel Legends team. We try to decide on what our fans would want because the don’t have the BAF. So we have to strategize.

The only place we’ve seen it in France is stores that already carry Marvel Legends. That’s why it’s odd for us.

What retailer is that ?

It’s called JouéClub, a specialty store. It’s weird but it’s cool to get these.

Do you want more characters ?

Sure, because of the price tag. I’m curious why did you get the Quantum Suit Captain America in this line ?

At the time when that was released, it was going to be near the Endgame timeframe and it’s the biggest movie in the world, right. So we thought… Obviously we didn’t know that the suit was gonna be white but we thought that suit overall is such an iconic thing like the whole time travelling sequence. We thought it’d be good to call back to that movie.

Weren’t you able to put a different head on that body as you did with the Target exclusive Hawkeye 2-pack ?

To be honest there’s a reason why it is priced differently. It’s sort of a business decision.

This line is not going to replace the BAF line, right ?

No, it’s not gonna replace it and we’re going to encourage more retailers that usually don’t carry the regular BAF line. The BAF characters are really important to us. That line is for consumers that are not really Legends fans to give them a taste of Legends are and hopefully once they’ve tasted that line, they will go to the BAF line and to the premium roleplay line…

It’s not a bait, it’s a good opportunity for new collectors who maybe missed a character.

We didn’t mention the Retro line yet.

Kerbans –  To me they’re the best X-Men.

Blaster – I only have the Brown costume Wolverine. It’s probably the only X-Man I own.

Blaster – I’m not really a X-Men fan. But I’ll probably get Cyclops and Iceman.

The beauty of it if you grew up with the Toybiz toys, that’s what the inspiration was for that cardback. I love the cardback, I love the look. I love how Silver Samurai is just like the original. I think those figures are awesome because they have really cool accessories, like Cyclops’ optic blast. Even if I didn’t love X-Men, I think the figures are really good. I think on your wall if you collect the cardbacks, it looks really nice.

We’ve already asked Patrick and Sam about it, but I’m curious to hear the Marvel aspect of it. It’s the announcement from Hasbro that it’s gonna ban plastic from its packagings. How will this affect the Marvel Legends line ?